I spent much of the past week in Black Rock City which at ~68,000 people is, for one week a year, the third largest city in Nevada.

Unlike most other cities, BRC is laid out in polar coordinates. Some roads radiate out from the center that are numbered on an hour-system (like a clock) with intervals every half-hour. Other roads follow the circumferences of the circles with the innermost road called the “Esplanade” and the rest given names following the alphabet from innermost to outermost (this year from A to L).  (See a diagram of the 2013 layout here and a huge aerial photo of the city here.)

While navigating a normal grid is pretty straight forward.  Navigating a polar grid is less intuitive for most of us. One thing that becomes clear rather quickly is that sometimes moving to an inner circle and then navigating back outward is shorter than staying on an outer circle.  Often the question arises “when is it more direct to travel inward to a smaller circle and when is it more direct to just travel around a given circumference.” This blog post is an attempt to develop a heuristic

(Note that some BRC participants may object to the very idea of trying to get somewhere efficiently.  The journey, they may argue, is often more interesting than the destination. I have some sympathy for ,this view.  However, you sometimes just want to be first in line for some cold pizza* or get the best seat for a geology lecture. Furthermore, folks who would like a higher journey to destination ratio, can simply follow the opposite heuristic from that developed in this post to extend their travel times.)

For those not interested in the mathematical details, here are the rules of thumb I derive below:

Note that my analysis ignores the complicated business around six o’clock which is confusing enough to be avoided anyway.  And I ignore the open circle at the top.  If you are crossing it, the rule is just to take a straight line to your destination on the other side.

The logic behind step (1) above is pretty straight-forward.  It is shorter to travel around an inner circle than an outer circle, so if you are going to travel to a point on an inner circle, it makes sense to travel there first.  Similarly, if the point you are going to is on an outer circle from your starting point, it doesn’t make sense to move to the out circle until the end of the journey.

This insight effectively reduces the problem to one where your start and end point are on the same circle and the question becomes whether one should move to an even smaller circle that this starting point. 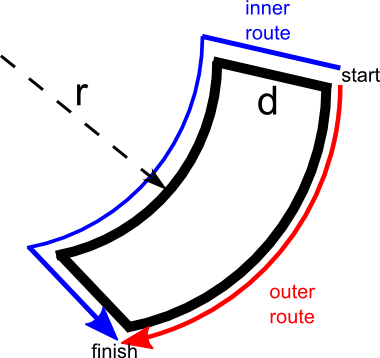 The distance to the outer route is:

When is the inner route shorter than the outer route:

The Maths Part 2 (where we’re going we don’t need roads):

The above analysis assumes that one stays on the Esplanade, but it is always a shorter distance to cut across the inner circle (though the  road conditions are not as good).  Does this change the analysis? 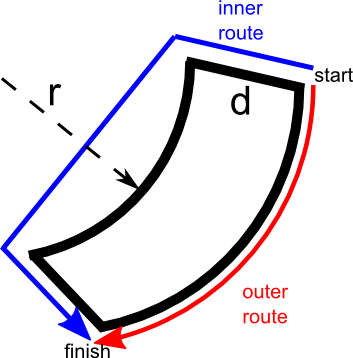 The length of the outer route is the same as above:

The condition for cutting across the inner circle vs taking a circumference, where theta is in radians is:

Because of the sin function, solving this inequality is tricky.  So I just solved it numerically using the ratios of r to d from the official BRC layout — the distance from the Esplanade to A is 1/5 the distance from the center to the Esplanade, r, and the distance between each subsequent concentric circle is 1/10 of r.  Plugging these values in to the above inequality for various times from 0 to 6 hours gives the following conditions where it is shorter to cut across the inner circle: