I think there will be more in the weeks to come.

Update: Herb Gintis responds to the Pinker Edge essay.  He writes about the evidence for altruistic behavior/preferences in humans, which is something I did not mention in my blog post.

Perhaps I should rename this blog “Why Famous Scientists are Wrong About Group Selection.”

This month’s post is a response to an Edge essay by Steven Pinker (author of The Blank Slate and The Language Instinct) called The False Allure of Group Selection.  My understanding is that a number of researchers in the field have been given the opportunity to respond to this essay, including Peter Turchin, and my PhD adviser, Pete Richerson.  My comments are likely to overlap, but perhaps this will be a useful summary of the issues.

First, I should reiterate, as I tried to do in first blog post, that multilevel selection and inclusive fitness are not different mechanisms of evolution, they are different ways of thinking about and modeling selection. So debates about which is the “right” or “wrong” mechanism are fundamentally misconstrued. David Queller makes this point in a comment:

Pinker is therefore correct that multilevel selection results can usually be seen as restating things we already knew in a different language. But I am loath to say that just because I speak English, others cannot speak in (as homage to Peter Kropotkin) Russian.

Instead we should be, at best, reduced to debating which of these modeling paradigms are the most useful for answering particular questions – which is a worthwhile debate for mathematical theorists, but esoteric for almost everybody else.

Second, my comments here are about cultural group selection models. I think few would disagree with Pinker that selection on genes at the level of large groups of humans is unlikely to be very strong. But I think he fundamentally misunderstands the mechanisms of selection on cultural variation.

Pinker lists three problems he has with cultural groups selection.  I list them here followed by why I think his concerns are misplaced.

Pinker’s first and third criticisms, which I see as very similar:

(a) The criterion of success is not the number of copies in a finite population (in this case, the meta-population of groups), but some analogue of success like size, influence, wealth, power, longevity, territory, or preeminence.

(b) The mutations are not random. Conquerors, leaders, elites, visionaries, social entrepreneurs, and other innovators use their highly nonrandom brains to figure out tactics and institutions and norms and beliefs that are intelligently designed in response to a felt need (for example, to get their group to predominate over their rivals).

Selection works on variation.  It does not matter how that variation is generated.  It does not have to be random.  Although variation was essential to Darwin’s theory, it wasn’t even clear for decades after Darwin that source of genetic variation in natural populations (mutations) were (mostly) random.  Inventions do not have to be random for selection to act.  As long as all innovators are not inventing exactly the same thing (i.e., as long as iPods are different than Zunes), then selection can act on the inventions’ relative merits.  In his comment, Daniel Dennet makes this point:

Brainchildren die like flies, thousands or even millions of hopeful ventures extinguished for every innovation that truly”goes viral” and then goes on to fixation in the shared culture we pass on to our descendants.

But what does “natural selection” add to the historian’s commonplace that some groups have traits that cause them to grow more populous, or wealthier, or more powerful, or to conquer more territory, than others?

This question blew my mind.  It is equivalent to asking “what does ‘natural selection’ add to the naturalist’s commonplace that some organisms have traits that cause them to grow more populous, or live longer, or have more children than others?”  Following Pinker’s logic, gene-based evolutionary theory had nowhere to go after Malthus or, at best, Darwin.  Anyway, Peter Turchin, who has using cultural group selection to understand the rise and fall of empires, has a post explaining why this is a useful endeavor.

Finally, there are two more points of confusion in Pinker’s essay.

First, group-level institutions like punishment, coercion and reciprocity are evidence for the importance of considering selective forces on groups, not against it (Joe Henrich spends the bulk of his article on cultural group selection making this point).

Especially interesting, to me, was Pinker’s citing of Sarah Mathew’s work with the Turkana as evidence against cultural group selection (since I am writing a book chapter with Sarah that cites the same work as evidence for the importance of selection on cultural variation between groups).  The issue here is that Turkana males are punished by third parties if they do not participate in dangerous cattle raids of non-Turkana groups.  Raids often involve individuals from different villages that are not known to one another.  There is a large incentive to avoid the lethal consequences of raiding, but to obtain resources from the raid.  Individuals that shirk are punished by their group.  The important thing to notice here is that punishment is collective and costly and is, thus, a “second-order” collective action problem.  Therefore, invoking punishment is not good enough to explain raiding – you also have to explain why punishment happens.  That is, groups that punish do better than groups that do not.

Second, the Turkana will only raid villages of non-Turkana.  They will not raid Turkana villages, even when those villages are more convenient.  This is exactly what one would expect from thinking about things from a cultural group selection perspective.  Richard McElreath discusses the importance of Mathew’s Turkana work towards understanding cultural group selection here.

Second, Pinker seems to mistake individual psychology for selective forces.  Group selection is a framework for modeling selection – but the predictions of the models depend on what goes into the model.  Saying that a group-selection framework automatically predicts pro-social preferences or individual psychology that maximizes group fitness is like saying that using a calculator to solve algebra problems automatically predicts the answer is seven.  Multilevel selection models are tools that partition selection into different levels of analysis which help us see the conditions under which behaviors that benefit the group might be favored over ones that do not.  Therefore, pointing to the existence or non-existence of pro-social preferences does not help us determine whether the framework itself is useful. 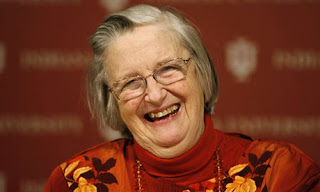 One of my personal scientific heroes, Elinor Ostrom, passed away today.  She was a the pioneer in linking economic and with field observations of how people *actually* solve collective action problems.

I never met her, but was deeply inspired by her writing, especially the books Governing the Commons and Understanding Institutional Diversity.

An often explicit goal of her work has been an evolutionary theory of institutions – where the institutional rules under which people live result from a process of selection.  I think this is an important process to understand as we develop theories about how modern institutions might respond to large-scale environmental degradation.

If you are so inclined, here is a very recent article of hers on The Social Evolution Forum discussing this topic.

Richard Dawkins has a review of E.O. Wilson’s new book (which I blogged about here). After reading it, I was planning for my next blog post to be a discussion of how Dawkins makes many of the same mistakes as E.O. Wilson, but from the other direction.

However, David Sloan Wilson (no relation to E.O.) beat me to it.

Dawkins and Wilson are only two of dozens of scientists who have been working on the issues over a period of decades. This is in contrast to their outsized images on the public stage, as if they are the only two figures meriting attention and all the important ideas sprang from them.

I mean Dawkins and Wilson no disrespect by calling them two among many. I trust that they would agree and would defer to others especially when it comes to mathematical models, which is not their area of expertise. If the public is going to become literate on the issues at stake—as well they should, because they are fundamental to the study of human sociality—then they will need to realize that both Wilson and Dawkins get some things right and other things wrong. Moreover, the entire community of scientists is in more agreement than the infamous exchange in Nature seems to indicate.